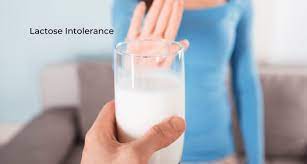 Lactose intolerance is when you love milk but it doesn’t love you back. Lactose is the major sugar or carbohydrate present in dairy products. It’s a natural source of energy, but it must be digested by a specific enzyme called lactase. Lactose intolerance is caused by a lack of an enzyme (lactase) in your small intestine that allows milk sugar to be digested (lactose). ALSO READ : JOINT PAIN AND ITS CAUSES.

Lactase converts milk sugar into glucose and galactose, which are taken into the circulation via the gut mucosa. Lactose in your diet goes into the colon instead of being digested and absorbed if you’re lactase deficient. Lactose intolerance is caused by normal bacteria interacting with undigested lactose in the colon, resulting in signs and symptoms.

Most newborns and youngsters produce enough lactase to safely consume dairy products. That’s a good thing, because dairy provides a wonderful source of calcium and protein for developing children. Many individuals, however, lose their capacity to make lactase, resulting in lactose intolerance. It’s also possible to become lactose-intolerant for a short period of time following a gastrointestinal ailment.

Lactose intolerance signs and symptoms commonly appear 30 minutes to two hours after eating or drinking lactose-containing meals. The following are some of the most common indications and symptoms:

Lactase deficiency is a condition in which the enzyme lactase lacks

Lactose isn’t digested if there isn’t enough lactase in the small intestine, which might cause bloating and gas from bacteria in the large intestine breaking down the lactose. Within 30 minutes to two hours after consuming a lactose-containing item, some persons develop gastrointestinal discomfort, nausea, diarrhoea, or even vomiting.

Calcium may be found in dairy products or dairy replacements, which are a practical, varied, and tasty source of calcium. To achieve the body’s calcium requirements, three servings per day are advised.

Is vegan diet good for health